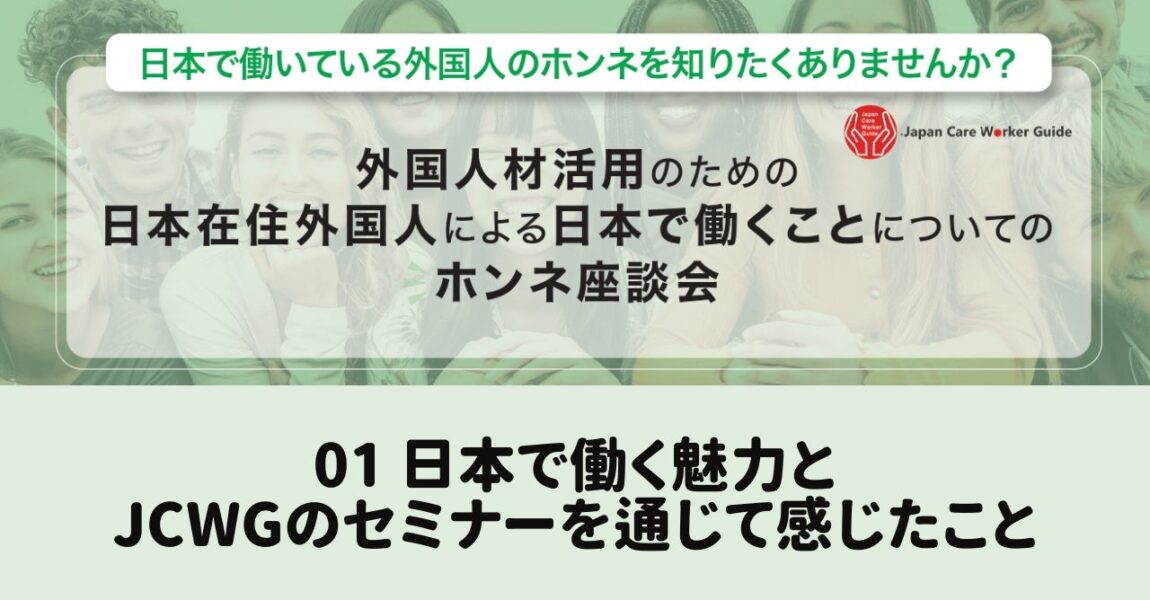 Part 1: The appeal of working in Japan and experiences of JCWG seminars

The “For those who want to work in Japan someday: an honest roundtable discussion about working in Japan by foreign nationals residing in Japan” symposium took place a few days ago.

In the video recording of the roundtable discussion, facilitated by Ms. Yuko Ito of Hokkaido Medical University’s Center for Advanced Research and Education, and Associate Professor Toshifumi Suzuki of the University of Shizuoka Junior College, foreigners working in Japan openly talked about the attraction of Japan and issues that need to be resolved.

■ Part 1: The appeal of working in Japan and experiences of JCWG seminars

In Part 1, we asked four foreign residents in Japan who hosted the “Japan Care Worker Guide (JCWG) Online Seminar”, an information session on the Specified Skills systems held for each country conducted from October 2021 to January 2022, about the appeal of working in Japan and their experiences of the JCWG seminars.

Ms. Ito: In the first part of “An honest roundtable discussion about working in Japan by foreign nationals residing in Japan”, we would like to invite Mr. Auliya Agung Barkah from Indonesia, Ms. Lim from the Philippines, Ms. Perera from Sri Lanka, and Ms. Yen, VuThiHai from Vietnam to join Professor Suzuki of University of Shizuoka Junior College to talk about their experiences in Japan.

These four individuals are active in fields other than nursing care in Japan and served as hosts for the “Japan Care Worker Guide (JCWG) Online Seminar” held for overseas participants. How did you all feel about hosting the meeting?

Mr. Auliya Agung Barkah (Indonesia): I was very nervous because it was my first experience. Fortunately, I was allowed to do it in my native language, so I am glad that I was able to talk a lot.

Ms. Lim (Philippines): I have some hosting experience, but this was my first online seminar, so I was nervous even though it was in my native language. I was worried all the time that I would say something silly.

Ms. Ito: In the “JCWG Online Seminar”, you explained about “specified skilled worker (SSW)” program to everyone. Did you know about “Specified Skills” before the seminar?

Ms. Yen, VuThiHai (Vietnam): I knew of this system because it had been introduced on Vietnamese TV and social media. I was able to grasp the details in this seminar.

Ms. Perera (Sri Lanka): I knew that there was the “Specified Skills” system in Japan, but as far as I know, the test in Sri Lanka started last December, so it has only just been introduced to the local people.

I was immediately contacted by people I did not know on social media. Until now, this was not a system that we could recommend because the exam was not held locally, but now everyone is studying the “Specified Skills” on social media.

Ms. Ito: Japan has a variety of residence statuses, including “specified skilled worker”. I believe that there are many people who want to improve their skills while working in the nursing care industry. What do you think, Professor Suzuki?

Professor Suzuki: I am in charge of training care workers and educating care workers, so I have many opportunities to meet with people who are using the “Specified Skills” system. As care worker is a national qualification, it is possible to work longer (in Japan) as a care worker with a “care worker” residence status. We are looking forward to their further progression.

Mr. Auliya Agung Barkah (Indonesia): I had a chance to talk a lot with Ms. Ayu, who works at a nursing home in Okayama Prefecture. Rather than going to a school, she taught herself Japanese and passed the Japanese Language Proficiency Test N2 (the level at which you can have discussions in Japanese) within one year, which is really amazing. I was also impressed that she came to Japan not just for herself but also for her family.

Ms. Ito: Ms.  Ayu will appear in the second part of the interview, so I would like to ask you again. So then guys, please tell us what you think is the “appeal of working in Japan”.

Ms. Lim (Philippines): Of course, it depends on the industry, but the higher salary compared to my home country is significant. As long as you don’t live extravagantly, I don’t think you will have any difficulties in making a living. Also, most employees in Japanese companies are generalists, so there are many opportunities to learn, especially for new graduates. It is easy to improve your skills because you can transfer after about 6 months to a year.

Ms. Perera (Sri Lanka): I have worked for two different companies and I have never felt any discrimination against foreigners, in fact, I have always been helped out. As long as you follow Japanese laws and the Japanese way of doing things, I don’t think you will have any bad experiences. I think the first big advantage is that I can live day by day in a safe and secure country while aiming to improve my career.

Ms. Yen, VuThiHai (Vietnam): I think Japanese society is very comfortable for women to work in. There is a strong compliance system and a good benefits package. There is also a good insurance system, and cancer screenings are free of charge. Compared to Vietnam, there are more holidays, and the maternity and childcare leave system is well organized.

Ms. Ito: I hear from women in Japan that it is still difficult for women to work, but I understand that people in other countries feel this way. We still need to continue our efforts to build a system that makes it easier for both men and women to work.

Professor Suzuki: You have all voiced the concerns that foreigners feel about working in Japan. In addition to salary, the most important thing they want to know is whether or not it is a good place for them to work. In Japan, we focus a lot on “career paths” such as staff education and training, but we still have a long way to go. It is important to create a comfortable working environment for foreign nationals as well.

Ms. Ito: Thank you very much. In Part 1, we talked about the “appeal of working in Japan and experiences of the JCWG seminar”. All of you who participated in Part 1 will continue to appear in Part 3, so please look forward to it. See you again in Part 2.

This article introduces some of the topics from the videos of the roundtable discussions. The video also includes other topics such as the reasons why foreign residents in Japan came to Japan and their impressions of Japan. Please click below to view the full video. 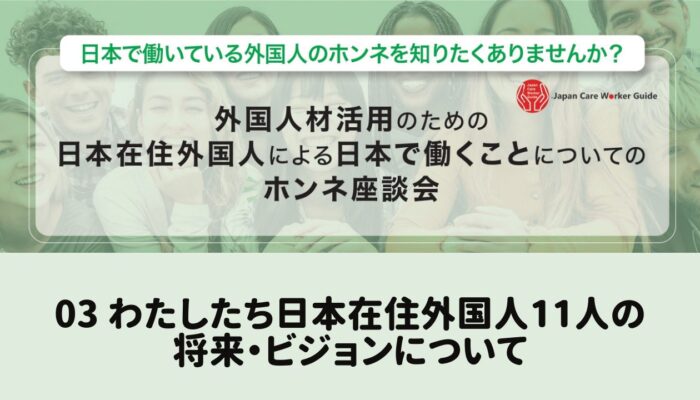 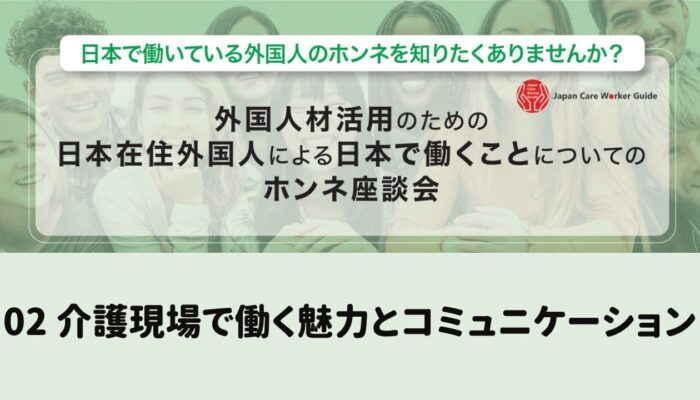 Part 2: The attraction of working in the nursing industry and communication methods